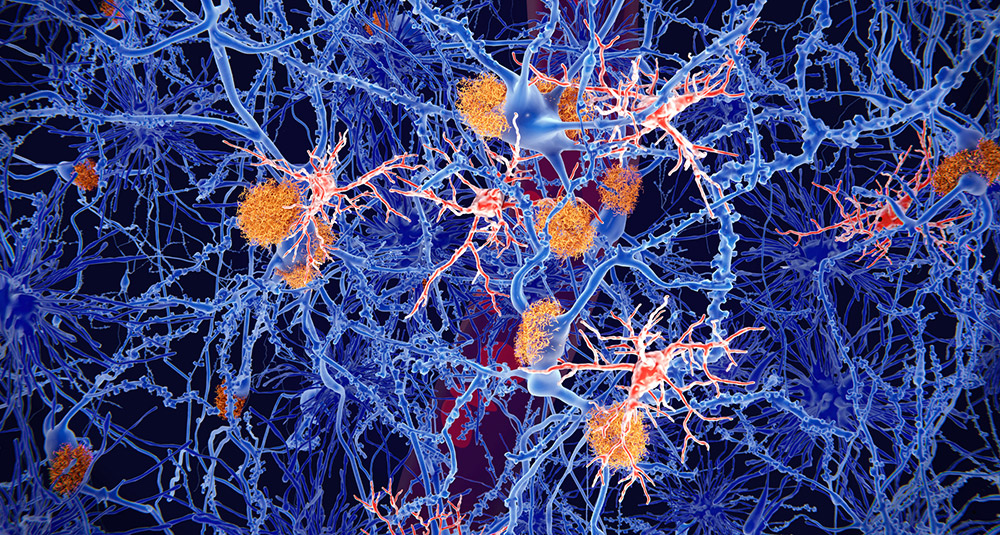 A hallmark feature of Alzheimer’s disease (AD) is the aggregation of amyloid-β (Aβ). Although many trials have been conducted aiming to eradicate Aβ plaques, there has been little success to date. However, a novel investigational agent, donanemab, was recently found to produce a substantial benefit in cognitive decline in Alzheimer’s, via targeting of Aβ. In June 2021, donanemab received the FDA’s Breakthrough Therapy designation as an investigational antibody therapy for Alzheimer’s disease, based on the clinical findings of the TRAILBLAZER-ALZ study (NCT03367403).1

Donanemab is a humanised IgG1 monoclonal antibody that specifically targets a post-translationally modified form of deposited Aβ peptides, called pyroglutamate Aβ, that is found specifically in brain amyloid plaques.2  By binding to this form of Aβ that has already aggregated into neuronal plaques, donanemab stimulates the immune system to remove plaques via microglial-mediated clearance.3 It has been suggested that by targeting established Aβ deposits, unlike many antibodies in development that bind soluble species, donanemab can help to clear the amyloid burden from the brain to slow progressive cognitive decline.

The Phase II trial, TRAILBLAZER-ALZ, conducted by Mintun et al, aimed to determine the efficacy and safety of donanemab in patients with early, symptomatic AD, who had tau and amyloid deposition detected via positron-emission tomography (PET).2 A total of 257 patients were randomly assigned to a 1:1 ratio to receive donanemab, 700 mg initially for the first three doses and 1400 mg after, or placebo intravenously every 4 weeks for up to 72 weeks. The primary end point of this study was the change from baseline in Integrated Alzheimer’s Disease Rating Scale (iADRS) scores at 76 weeks. Secondary end points included the change in scores on the Clinical Dementia Rating Scale-Sum of Boxes (CDR-SB), the 13-item cognitive subscale of the Alzheimer’s Disease Assessment Scale (IADRS), the Alzheimer’s Disease Cooperative Study-Instrumental Activities of Daily Living Inventory (ADCS-iADL), and the mini-Mental State Examination (MMSE), as well as the change in the amyloid and tau burden on PET. 2

The baseline IADRS score was 106 in both groups. At 76 weeks, patients assigned to receive donanemab showed a change from baseline of -6.86, whilst patients assigned to placebo showed a change from baseline of -10.06 (p=0.04), representing a reduction in overall cognitive decline attributable to donanemab.2 There were no significant differences for most of the secondary outcomes. At 76 weeks, the reductions in the amyloid plaque level and the global tau load were 85.06 centiloids and 0.01 greater, respectively, with donanemab than with placebo. Approximately two thirds of the participants receiving donanemab were amyloid-PET negative by week 76.

Overall, donanemab was found to modestly reduce cognitive and functional decline compared to placebo at 76 weeks, providing promising signs for the treatment of Alzheimer’s.  Donanemab’s breakthrough designation aims to expedite its clinical development. Eli Lilly and Company expect to submit a biologics license application (BLA) under the accelerated approval pathway later this year.1